Press Release: Eric O’Grey to be Speaking at 2016 Spokane VegFest! 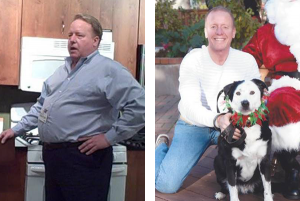 We are thrilled to announce Eric O’Grey will be a keynote speaker at the 2016 Spokane VegFest! In 2010, Eric O’Grey weighed over 300 pounds, had type 2 diabetes, high blood pressure, and took over $1,000 in medications per month. His doctor told him he would be dead in five years unless he changed his life dramatically. Six years have passed since then, and he is thriving. Eric is the star of a video about his physical transformation and mutual rescue from his adopted shelter dog, Peety. This video has gone viral worldwide and has over 30 million views. He has recently been a guest on the Rachel Ray show and the Paw Print Podcast. Eric’s story of how a special dog helped him to get active and inspired him to change his life has touched millions of people. He has also transformed his life and health through the power of a whole-foods plant-based diet. Eric is a Spokane local and will be an instructor at the INVeg plant-powered living course.